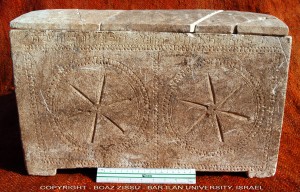 (HT to Joel and Jim West who has the press release.)

“Israeli scholars say they have confirmed the authenticity of a 2,000-year-old burial box bearing the name of a relative of the high priest Caiaphas of the New Testament. The ossuary bears an inscription with the name “Miriam daughter of Yeshua son of Caiaphas, priest of Maaziah from Beth Imri.” An ossuary is a stone chest used to store bones. Caiaphas was a temple priest and an adversary of Jesus who played a key role in his crucifixion. The Israel Antiquities Authority says the ossuary was seized from tomb robbers three years ago and has since been undergoing analysis. Forgery is common in the world of biblical artifacts. The IAA says in Wednesday’s statement that microscopic tests have confirmed the inscription is “genuine and ancient.””

Now the image that was released is tricky to pull anything off of due to its resolution, but I can see enough of the inscription to tentatively say it matches what they say it does. But let me see what I can do…

UPDATE: Here’s what I was able to pull off at first glance: 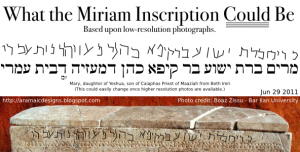 (Note: Please excuse the typo. Where the illustration is correct, the transliteration should read ישוע not יושע. I’ll post an updated image later. Image updated.)

Of course, this is a bit of “reading into” the inscription on a low-res photo. Once higher-resolution photos are available, I could be completely wrong in portions.

UPDATE: Antonio Lombatti seems to agree with my reading here:

UPDATE: Robert Cargill has a higher-resolution image of the inscription that is much clearer than the image I had to work from and he managed a much better job sketching the text out. 🙂

5 thoughts on “Miriam daughter of Yeshua son of Caiaphas, priest of Maaziah from Beth Imri”