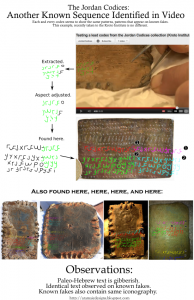 Sorry for the hiatus. Moved into a new apartment, and now the whole family has come down with a sniffle. 😛 It has been madness, but more on that later…

So, Elkington has posted a new video that shows the codices being tested at a lab.

However, taking a close look at the codex that’s being tested, it’s one of those babble-text examples with little doubt.

These have been turning up in the markets of Egypt, Saudi Arabia, Jordan, Israel, and other places throughout the world, each with a different absolute claim of origins and antiquity.

But here’s another kicker. Elkington claims the following on his Facebook page:

Thanks to certain critics of this page, we would like to highlight a correction to a small portion of text found within a transcription of the Oxford (OMCS) metallurgical report. Whilst typing from the original copy (the scanned original is also posted on this site ) a sentence was unintentionally omitted, which has since been corrected. Please note that this has no bearing on the final conclusions of the report.

Dan McClellan I think put it best a long while ago:

Will Elkington argue for haplography as a result of homoioarcton? [[my note: YEP!]]Possibly, but it can be no coincidence that the edited text supports a fundamental claim that Elkington highlights and emphasizes elsewhere. Elkington has demonstrably altered the report to support his assertions. This is flagrant and egregious deception, and it shows quite conclusively that Elkington is willing to lie and to openly and transparently manipulate scientific data to make his codices appear ancient. They simply are not.

I have no doubt that this set of lab tests will say that the lead is old, as every example is made of ancient lead. However (as I’m sure I’ve mentioned before) ancient lead is so common that the quantity necessary to make a codex can purchased on eBay for $5. (Here’s some more, too.)

However, the report is very clear that the corrosion is not ancient, and the researcher behind the Oxford report (which was the one that was altered), when asked *specifically* what he meant, he pegged the window of construction at a few decades to about 100 years.

In any case, the academics are fairly unanimous (including those who are on Elkington’s supposed “team”): These codices are bogus.

One thought on “David Elkington and the Lead Codices… More Rubbish…”