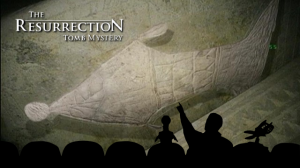 Where I was rather ill (blasted cold…), Bob Cargill, Mark Goodacre and Tom Verenna were having lots of fun live-blogging through The Resurrection Tomb Mystery last night.

Here are some of the highlights!

“CGI is well done. Simcha’s CGI folks get an A+ (especially since we see so much of it in the documentary. And the press. And the book. And the website.)”

We kept being told, “Just wait for the documentary. You’ll see the actual pictures.” But there were none. There were better pictures on the website. The documentary kept showing a rotated vessel and inked circles to make them look like ‘fish’. And you now see why they rotated the fish from the catacombs scene. It’s a visual trick to prime the brain to see similar fish.

In the words of Gerald Ford, let us hope “our long national nightmare is over.” 🙂

They are pressing on after making progress.  But the cable has snapped and they’ve hit a problem, a problem of the kind that in documentaries requires an . . .

11.00: the documentary is over.  No real surprises.  One big disappointment for me was not seeing more of the ossuaries and the tomb itself.  I was surprised to see just how often they mentioned Joseph of Arimathea and just how weak the attempts to link the tomb to Jesus appeared.

“Debate is just beginning”  Well, it’s been going on for six weeks or so and I’m afraid we are not persuaded.  Sorry, Simcha.  Sorry, James.

That isn’t a skull, it’s a pelvis.

This rosette ossuary is the same filmed in the 2007 doc.

OMG!  Did they just TILT the orientation to make it look like a fish?!  Wow, talk about forcing the data to fit a conclusion here.

They keep using the CGI’d image, not actual photos.

Whew…that was brutally painful to watch.