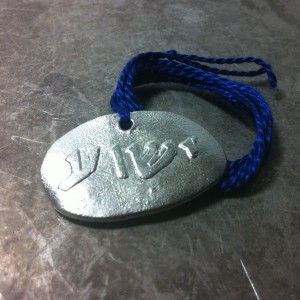 It is now time for you to vote for the winner of the third pendant.

Voting will close at the end of the week, and all three winners will be announced together!

Initial interest in the Aramaic language seemingly comes from all directions but its discovery and subsequent interest seems to shares several strong themes. Here are the entries, and the voting form is below:

Aramaic – I guess you all wonder what cosmic events had transpired in times long past in order for me to acquire a taste for the Aramaic tongue? Well… none, but I still have a story to tell. As for most people, I first become aware of the existence of the Aramaic language from watching Mel Gibson’s Passion of the Christ. I was struck by the beauty of the words uttered by the actors, and the way language made the Jesus narrative come alive. Little did I know back then that the re-construction presented in the movie was as pleasing to the ears those who actually knew Aramaic as the screams caused by the slaughter of the innocent back in the days of Herod. Thankfully, my ignorance of the language still allowed me to see the poetic beauty that wasn’t there. 😉 The movie sparked an interest in me, a desire to understand and know the language that Yeshua himself spoke, which sadly I for some reason thought was Hebrew. This then led me to study Biblical Hebrew at the University here at Gothenburg, only to later find out that Hebrew and Aramaic were not the same language. Great! My ability to converse with the Lord at his coming, impressing him with the hitpa’el-stem would no longer be an option. I realized I would have to settle for talking with Habakkuk. However, seeing that my future interactions with the prophet would not suffice, I decided to get accustomed with Aramaic as well. My first real exposure to Aramaic came from reading through the book of Daniel in my Hebrew Reader’s OT. After unknowingly stepping over the abruptly set boundary of Dan 2:4b, I found myself caught in an explosion of Alephs leaping out from the pages of Scripture. I barely made it out alive but the experience had made me all the more richer to the differences between the two languages. Unexpectedly, my love for Aleph grew over time, so I started learning Biblical Aramaic only to be informed that the Peshitta was written in Aramaic as well, so I began learning Syriac instead. I could now finally read the Lord’s words in his native language. Oh the joy that swept over me when I discovered that the Peshitta was not written in the dialect of Jesus. So I gave up… well, I did not give up my love for the language; but rather me trying to learn it. I’ll stick with Greek and Hebrew, but once in a while I indulge myself in checking through some conversational Galilean in case Christ were to appear and invite me for a cup of coffee.

A complete “mishap” landed me on [this] web page. I’ve been wanting for a long, long time to learn this language and be more familiar with the Aramaic language and symbols which is what I was looking for originally. But [this] site instantly had my curiosity. Beautiful, peaceful and everything seemed to be so precise. I love it!

I became interested in Aramaic because I was researching the power of words and language. And when I say that I mean that in some cultures and traditions the words and characters of a language themselves are considered to be a kind of power and filled with divine energy. Sanskrit is an example of this. Chinese characters are considered to be power symbols. And in the Kabbalistic tradition, the Hebrew letters and their combinations and numerical significance are another example. I have a deep love of Christ. I’m not a traditional person by any means, but The Lion of Judah and all that he signifies is someone whom I hold dear. And I realized that I didn’t know much about the language he spoke in his place and time. And when I began to research this I was led to the Aramaic site. And I have fallen in love with Aramaic. It is a beautiful language from a visual perspective. I use it now in my artwork and I have tattooed it on my body. When I feel low and I am concerned about whatever is going on in my life I look down on my arm and there are beautiful symbols that only I can read which say “If God is for us who can be against us?” And it is a reminder to do the right thing so that I am in alignment with all that is good, and that with that I need not worry.

I’m really into tattoos and have several that represent my faith. I wanted to get a quote from Jesus tattooed on my wrist, but I wanted it in the language in which it was spoken. So I did some searching and found [the Aramaic Designs] site. I am happy with both the translation I ordered […] and the tattoo I had done. By the way, the quote was from John 19:30. “It is finished!”

My interest in Aramaic began with my interest in the historical Jesus. It became clear to me as a student that scholars who knew Aramaic had insights, and were able to discuss historical matters, at a level closed to others. Their proposals might be wrong, on the other hand, and without Aramaic who could challenge them? I also had interest in ancient Judaism, and Aramaic is also important for that, in particular sources such as the Talmudim, Targumim, etc. But really coming to grips with Aramaic resulted from my becoming interested in the texts of the Mandaeans, which are written in a dialect of Aramaic known as Mandaic. Because Aramaic is insufficiently known by scholars of ancient Gnosticism, and this dialect is particularly obscure at times, this important literature has been neglected in ways that it does not deserve to be.

I first became aware of the Jewish Diaspora in the east from reading Josephus and wondered why Paul did not seem to have had much of an interest in them. On my own investigation I was amazed at the “New World” that opened up before me. Empires, civilizations, governmental administration, libraries of literature, religions and eventual heresies and all of these constructed in the very Language that Jesus spoke, or in the case of Syriac something quite near it! I eventually came to realize that perhaps there were subtle nuances or word plays that Jesus may have used in Aramaic that would not be easily reproduced in a Greek translation, So my interest and appreciation of the language continues.

Vote For Your Favorite:

Your name and email are only used to verify that you’re not a spam bot and ensure that voting is fair. Only one vote, please. 🙂

The Candidates For “Why is Aramaic Relevant Today?”

For your reading pleasure, here are the entries that are currently being judged for the best “Why is Aramaic Relevant Today?” short essay. The winner of this category will be announced with the closing of the previous category’s voting. 🙂

The intricacies of a language reflect the character of a time and the culture that uses it. Over hundreds of years a piece of literature will be translated and retranslated many times in various languages. With each new translation something is almost invariably lost. Because each new language has a character of its own it can be difficult over many translations to uphold the true meanings of words and intent of the authors. Aramaic is important because it was the language that Jesus spoke. Even if you are not a Christian, his importance on the impact of history and culture throughout the world cannot be denied. Maintaining a knowledge of the language which he spoke and realizing that the new testament biblical authors were people who were Aramaic speakers who wrote in Greek is important in understanding the time in which Jesus lived. So much would be lost if we lost Aramaic.

I would say that -even if I do not read Aramaic- it is (at least) useful for NT / gospel studies… Not only Aramaic, for sure (Greek and other […] languages also). My reference is Dr. Jeremias…  !מרן קם

Every language affords it’s speaker the ability to not only convey the common, trivial and mundane stuff of life, but also to enter into a worldview, an interpretive framework, that is unique and particular to itself. Aramaic is relevant today because there has been no other time in history when so many tools and facilities have been available to enable both the scholar and the enthusiast to enter into the worldview and mindset of it’s ancient and modern speakers. Aramaic was for centuries the tool of government, administration, commerce and religion for much of Western Asia. It was also the everyday language for a large part of the Eastern Jewish Diaspora as well as the common folk of Gallilee where Jesus grew up. The relevance of Aramaic becomes apparent when an unsuspected meaning in the words of Jesus is revealed and one is given a glimpse into how his listeners may have understood his meaning.

Aramaic is relevant today for several reasons. First of all, it provides you with the satisfying accomplishment of being able to speak the language Jesus spoke. This is psychologically satisfying for the Christian believer. Secondly, not many people are fluent in it. Therefore you immediately become a specialist. Not many people are specialists and it is inherently good to specialize. The world needs more specialists, including Aramaic specialists, whereas it doesn’t really need another store clerk or receptionist or school teacher. Thirdly, the Aramaic language is a unique lens into the time of Yeshua (Jesus). Fourthly, following on from the previous point, Aramaic is obviously of relevance to the New Testament and to New Testament studies. Not many New Testament scholars can read Aramaic, and there needs to be more who can. Fifthly, Aramaic is exceedingly useful if one wishes to become an archaeologist excavating in the Middle East. It is also useful for papyrologists dealing with Ancient Near Eastern / Levantine writings. And it is necessary for those whose chosen field of expertise lies within the era and milieu of Second Temple Judaism. Sixthly, Aramaic is also extremely useful and pertinent to those researching early Syriac texts, including the Peshitta. Seventhly, if one wants to read the Targums in the original, one must be able to read Aramaic. Thus Aramaic is also extremely important for students and scholars of the Hebrew Bible. Finally, specializing in Aramaic can sometimes (albeit not very often) win you valuable competitions such as this one.

Aramaic is still relevant to shlock novelist and movie directors as it provides an exotic language for their villains and conspiracy theories. If Aramaic were to completely disappear Dan Brown would be out of work, and would you really want to live in that kind of world? No, I think not.

The Aramaic connotations, with their passion and their color, communicate matters of the heart, which is the essence of what the Besorah is all about. Wheras the Greek communicates more precision from the head, which aids in clarity of thinking, but doesn’t quite capture the heart issues invovled.