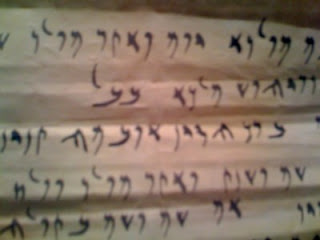 [NOTE: If you find this article interesting, you might also find this one a curiosity: “‘Barak Hussein Obama’ Mentioned in Ancient Manuscript?” Read on…]

Now for those of you who are regular readers of this blog, you know that I do not dive into matters of theology here. I try my best to simply represent issues as they pop up in scholarship and popular culture, and when an issue such as this (which breaches both theology *and* politics… yeesh…) I proceed…

UPDATE August 28 2014: The original video was taken down years ago, but recently there has been a sudden surge of traffic to this article so I looked about and found that the video was re-uploaded to YouTube and now has over 600,000 hits. Here it is:

I originally decided to shy away from this video clip, but when I saw that Salon.com had picked it up through my news feeds (if anything even mentions “Aramaic” on the Internet, I hear about it), I figured it was in the limelight enough to finally comment.

So here is my analysis, theology and politics 100% removed. This is a look into the actual claims of the video. The following transcript is reproduced under Fair Use Doctrine for the purposes of criticism in a manner consistent with current protections and rulings:

Luke 10:18:
And he said unto them, I beheld Satan as lightning falling from the heavens.

“These words are written in Greek and translated to English; however, Jesus spoke these words originally in Aramaic, which is the most ancient form of Hebrew.

As you know, the Old Testament was written in Hebrew. If a modern Jewish Rabbi were to speak these words of Jesus today, he would speak them in Hebrew, much the same way that Jesus would have spoken them.”

Mistaken Claim: Aramaic is not the most ancient form of Hebrew. Since Hebrew is a Canaanite language, the most ancient form of Hebrew would be Proto-Canaanite. Jesus spoke Old Galilean Aramaic, which is part of the Aramaic language family. Eventually the Canaanite and Aramaic language families date back to Proto-Semitic, but that is certainly beyond the scope of this claim. The two are very different languages.

“So in Hebrew Jesus said that he saw Satan falling ‘as lightning from the heights’ or ‘from the heavens.’

So what are the words for ‘lightning’ and ‘heights’ or ‘heavens’ in Hebrew?

From the Strong’s Hebrew Dictionary word #1299: A primitive root-word meaning ‘to lighten’ or ‘lightning’ or ‘to cast forth’ — the word is “BARAQ”.

In the Strong’s Hebrew Dictionary word #1300: ‘lightning’ or by analogy ‘a gleam, a flashing sword, or a brightness or a glittering’ — the Hebrew word is “Baw-Rawk”

Correct Claim: Baraq [ברק] is the word in Hebrew for ‘lightning.’ In Aramaic, its cognate is also “baraq” [ברק] or “barqa” [ברקא] depending on dialect and context.

Mistaken Claim: Mr. Obama’s first name does not come from the root “baraq” [ברק; bet-rish-qof] but the root “barak” [ברך; bet-rish-kaf] and is a common Semitic name and means “blessed” or “blessing.” To claim that these two words are the same is like saying that “right” and “write” are the same word, as they sound similarly but both come from very different etymology.

Now consider this amazing fact: The Book of Isaiah is the source of the origin of the Christian concept and understanding of Satan or ‘Lucifer’ as Isaiah calls him in chapter 14, especially in verses 12 – 19.

Mistaken Claim: Isaiah does not call Satan ‘Lucifer.’ Latin translations of Isaiah use the name ‘Lucifer’ (which literally means the “morning star” “day star” or the planet Mercury) as a translation of the Hebrew phrase הילל בן־שחר [“hillel ben shakhar” = “morning star, son of dawn”].

In Isaiah chapter 14 verse 14 ‘Lucifer’ or Satan is credited with these words:

“I will ascend above the heights of the clouds; I will be like the most High.”

In the verses of Isaiah that refer directly to Lucifer, several times it is mentioned that Satan has fallen from ‘the heights’ or from ‘the heavens.’

The Hebrew word used in this text for the ‘heights’ from which Satan fell is Strong’s Hebrew Word 1116, pronounced “Bam-maw.”

Bammaw is most commonly used to refer to a ‘high, sacred place,’ as well as the ‘heights’ to ‘the heavens’ or ‘the clouds.’

Comment: The actual form of the word used in Isaiah 14:14 is במתי [“bamathe”]. Only in its root form is it pronounced “bah-mah.”

Comment: במה [“bamah”]’s primary meaning is “shrine.” The “High places” mentioned in the King James Version of the Bible describe built-up altars that were used in religious practice throughout Mesopotamia.

Mistaken Claim: במה [“bamah”] does not mean “the Heavens” or “the clouds.”

Comment: “The Heavens” in Hebrew is השמים [“ha-shemayim”] where in Aramaic it is שמיא [“shmaya”].

In Hebrew the letter Waw is often transliterated as a “U” some scholars use the “O” of this transliteration. It is primarily used as a conjunction to join concepts together. So, to join in Hebrew poetry the concept of lightning or ‘baw-rawq’ and the high place or heaven or the heights of heaven, the letter “U” or sometimes “O” the Hebrew letter Waw would be used.

Correct Claim: Waw is used as a conjunction.

Mistaken Claim: Waw, as a conjunction never means “from.”

The word “Satan” is sah-tan in Hebrew; a direct translation.

Correct Claim: שטן [“‘satan”] is the Hebrew and Aramaic word for “Satan.”

“And I saw Satan as Baraq u-Bama.”

Mistaken Claim: In light of the previous comments, in Hebrew it would have most likely been ברק מן השמים [baraq min ha-shamayim]. In Aramaic, it would most likely have been in ברקא מן שמיא [barqa min shmaya] or in Galilean Aramaic ברקה מן שמייה [barqa mən shəmayya]. (Update Aug 28 2014)

Did Jesus reveal to us the name of the Antichrist?

I report, you decide.

Comment: I believe that in light of the languages in question, that it is clear that this entire argument, theology and politics strictly aside, is based upon several, demonstrably faulty premises.

UPDATE November 2012:
For those of you interested in the dialect of Aramaic that Jesus, himself, spoke I have posted my reconstruction of The Lord’s Prayer in Galilean Aramaic:

Or if you’re interested in learning the language of Jesus, yourself, be sure to check out: