I learned about this lecture just a few moments ago and I will certainly be attending!

Aramaic Origins and Dialects: A Model for Proto-Afroasiatic
Monday, February 16, 2009

Reverend Fulco will discuss the Aramaic language and its position within the Semitic family, as well as his past work in reconstructing reconstructing Aramaic for the script of the 2004 film, “The Passion of the Christ,” directed by Mel Gibson.

He is currently working on a script in Punic for the upcoming film, “Hannibal the Conqueror,” directed by Vin Diesel.

Below are scans of the full transcript of Gabriel’s Revelation:

The entire article with analysis (in Hebrew) can be found at:

Thanks go out to Duane for this one. 🙂

JERUSALEM — A three-foot-tall tablet with 87 lines of Hebrew that scholars believe dates from the decades just before the birth of Jesus is causing a quiet stir in biblical and archaeological circles, especially because it may speak of a messiah who will rise from the dead after three days.

It was in Cathedra that Israel Knohl, an iconoclastic professor of Bible studies at Hebrew University in Jerusalem, first heard of the stone, which Ms. Yardeni and Mr. Elitzur dubbed “Gabriel’s Revelation,” also the title of their article.

In Mr. Knohl’s interpretation, the specific messianic figure embodied on the stone could be a man named Simon who was slain by a commander in the Herodian army, according to the first-century historian Josephus. The writers of the stone’s passages were probably Simon’s followers, Mr. Knohl contends.

To make his case about the importance of the stone, Mr. Knohl focuses especially on line 80, which begins clearly with the words “L’shloshet yamin,” meaning “in three days.” The next word of the line was deemed partially illegible by Ms. Yardeni and Mr. Elitzur, but Mr. Knohl, who is an expert on the language of the Bible and Talmud, says the word is “hayeh,” or “live” in the imperative. It has an unusual spelling, but it is one in keeping with the era.

Two more hard-to-read words come later, and Mr. Knohl said he believed that he had deciphered them as well, so that the line reads, “In three days you shall live, I, Gabriel, command you.”

To whom is the archangel speaking? The next line says “Sar hasarin,” or prince of princes. Since the Book of Daniel, one of the primary sources for the Gabriel text, speaks of Gabriel and of “a prince of princes,” Mr. Knohl contends that the stone’s writings are about the death of a leader of the Jews who will be resurrected in three days.

Mr. Knohl said that it was less important whether Simon was the messiah of the stone than the fact that it strongly suggested that a savior who died and rose after three days was an established concept at the time of Jesus. He notes that in the Gospels, Jesus makes numerous predictions of his suffering and New Testament scholars say such predictions must have been written in by later followers because there was no such idea present in his day.

But there was, he said, and “Gabriel’s Revelation” shows it.

“His mission is that he has to be put to death by the Romans to suffer so his blood will be the sign for redemption to come,” Mr. Knohl said. “This is the sign of the son of Joseph. This is the conscious view of Jesus himself. This gives the Last Supper an absolutely different meaning. To shed blood is not for the sins of people but to bring redemption to Israel.”

I’d love to see how things unfold around this artifact, especially if or when they publish high quality photographs or a transcription. Keep your eyes peeled. 🙂

If anyone finds the transcription, I’d also appreciate it if they were to post a link in response to this thread so we can get some discussion going.

Aramaic Designs is now offering a spiffy new series of Tattoo Stencils featuring the Song of Solomon (à la David Beckham albeit with a choice of proper gender): 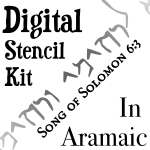 From the Song of Solomon, “I am my Beloved’s and my Beloved is mine,” in Aramaic, guaranteed correct. Choose it in either masculine or feminine forms, or purchase both at a significant discount (a great gift for couples). 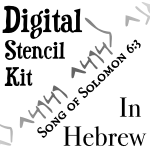 The same as the one above only in Hebrew. You can also obtain it in either masculine or feminine forms, or both together as well.

One can get some strange things from a Google news feed given the search term “Aramaic.” This one came from a Jewish newspaper “5 Towns Jewish Times” in an article named Understood by Rabbi Abraham Sebrow:

“Aramaic has a special distinction in Jewish law. It is the only language that one is not permitted to use while praying alone. Aramaic is considered a corruption of Hebrew and prayers in that language are not processed in heaven when recited by an individual.” (full article)

I can understand that this may be an article of faith, and I will not say anything against it to that regard, but the idea of Aramaic being a corruption of Hebrew is a bit misleading. I can understand that Hebrew is at the heart of Judaism, and that when Aramaic superseded it as the lingua franca of the Jewish People that there were translations that had to be made if not simply for the understanding of the common man (and this is why we have such things as the Aramaic Targums).

However, Aramaic is a language that evolved separately from (albeit closely next to) Hebrew and is not descended from it. Both Ancient Hebrew (a dialect of Canaanite) and Ancient Aramaic come from a much older language from which both of them (including Arabic and a few others) are descended.

I do hope that Rabbi Sebrow meant the former. 🙂