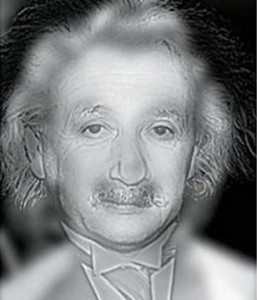 Where I admit that this post is inspired by The Jesus Discovery / The Resurrection Tomb Mystery goings on, I feel that it is a point that is important to a much broader context: Mainly, that digital ink to outline what we think we see can be tricky business.

The image above has been all over the Internet so I’m not surprised if you’ve seen it before. In fact, I am not sure who had it first, so I am not sure who to give proper credit to (which makes my librarian sensibilities twinge…).

Now, if you are in the “seen it” camp, find someone who hasn’t and step them through the process and *watch* their reaction.

Step 1) Note that this image, assuming that you’re sitting in front of your computer monitor, looks like Albert Einstein. The sharpened details of his face are quite plain and unmistakable.

Step 2) Now, stand up and walk about 12′ away (the other side of the room) and then look back at the image.

Step 3)  Say out loud what happened.

Yes, so why does an image that looked so clearly like Albert Einstein suddenly become Marlyn Monroe?

The answer is a matter of detail. The sharpened details of Einstein’s face were superimposed upon a fuzzy image of Monroe. When looking at the fuzzy picture from a distance, the little sharpened details disappear leaving behind a broader image and your brain does the rest.

This is why “digital ink” techniques can be very tricky. If one does not enhance the correct elements of an inscription, one can literally superimpose onto the image whatever one wishes to see.

There was a similar problem with one of the first digital restoration attempts on the Dead Sea Scrolls. Weak lines sharpened can change letters around and alter entire readings, so with any reconstructive effort there is great responsibility to keep one’s enhancements as faithful to the underlying material as possible. 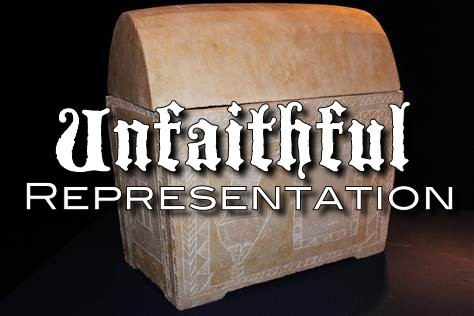 The title of this article is what I believe is the biggest problem with the entire Talpiot debacle: The unfaithful representation of archeological evidence. Since I hope to be thorough enough in this article to make it my last post about the Jonah Ossuary for quite some time, allow me to start at the very beginning.

Since the first press release of the Jonah Ossuary the multimedia was unfaithful. The very first shot of the “fish” that the public was given was simply described as a “blow up” (“A Preliminary Report” first version, p. 42).

However it was not too long before it was discovered that this initial image was computer-generated composite that was rotated 90 degrees to the right. Digital manipulation artefacts and damnable evidence of reconstruction were found throughout the image, which included (among other things): 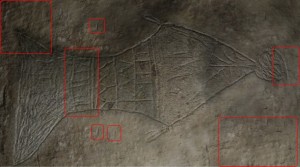 These criticisms eventually lead Dr. Tabor, at first, to re-orient label the image in his original report and re-label the caption as a “blow up” (“A Preliminary Report” second version, p. 42) without providing citation of any change, addendum or correction.

The image in this caption was rotated back to it’s proper orientation, however it was mirrored horizontally to better match the image on the museum replica that was added above it.

With its original orientation confirmed, It was immediately recognized by the majority of commentators as a vessel, not a fish.

Very quickly after further mounting criticism, Dr. Tabor re-labeled the image once more to “CGI composite of image” (“A Preliminary Report” third version, p. 42), again not providing a citation of any change, addendum or correction.

He also mirrored the image horizontally again to bring it back to it’s original plane and orientation.

Throughout all of this, yet another image was featured at the very top of the Jesus Discovery website with the “fish” in yet another orientation.

All of this re-labeling, flipping, rotating and resizing in response to criticism was alarming, especially since it was done in such a hasty manner. It was as if footprints were quickly being swept up to leave onlookers with no indication of a mistake or any acknowledgement of what has happened.

This is even worse when the CGI image itself was shown not to match actual photographs, and when actual photographs were examined, the figure began to look less and less like a fish, and more and more like a vessel (and vessels are relatively common on ossuaries from the time period).

Even the “museum quality replica” did not reproduce a number of features that were present on the CGI reconstruction such as what Tabor identifies as “Jonah’s head wrapped in seaweed.”

The replica rounds out the shape of the bottom of the figure — virtually eliminating its original shape — to make it more head-like, where the original is hemispherical, much like the base of contemporary pottery.

This artistic embellishment is not faithful to the original inscription.

“Fish” in the Margins

On the museum replica, attention is drawn to “fish” in the margins of the ossuary’s border.

Images on The Jesus Discovery website originally showed these “fish in the margins” with digital ink over them to make them “clearer.” However, once criticism mounted, the original image was taken down from the website completely.

It was quickly replaced with:

All of the images that do not have digital ink clearly show that the “fish” in the margins are ovals, not ichthoi, as the replica shows clearly.

This framing is not faithful to the original inscription.

On The Jesus Discovery’s website, digital ink was not the only tool used. Image filters were also employed.

Dr. Tabor was very adamant with his claims that none of the images were enhanced; however, the color and levels on a number of examples labeled “no cgi” prove otherwise.

“CGI” is an initialism which stands for “computer generated imagery.” Where Dr. Tabor may argue a point of nomenclature or technicality (perhaps stating that nothing was “constructed” in these images), a number of pictures labeled “no cgi” were raw where others were processed and enhanced by a computer with no distinction between the two.

This appears to make “no cgi” a label that is unfaithful to the state of the presented evidence.

Not soon after the documentary came out, “another discovery” was hinted to about the Jonah Ossuary that was “discovered” by Dr. James Charlesworth: That the very name of Jonah was found inscribed in the “mouth” of the “fish” itself.

Now, these outlines provided by Tabor and Charlesworth could very well spell out “Yonah” provided that they are a faithful representation of what is actually on the ossuary. However, that is once again the crux of the matter.

There are serious problems with it, to the point that a large number of other scholars have been scratching their beards over how they reached this conclusion:

Each photograph of the inscription shows a slightly different set of lines, even accounting for things such as color enhancement and angle of light. 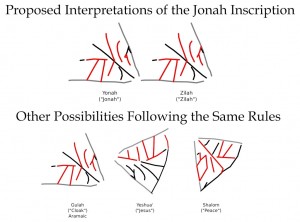 This has led multiple interpretations depending upon which lines are taken into account, and which lines are ignored, showing that the series of lines is more of a Rorschach than a hard and fast inscription.

However, despite these shortcomings, soon after this “discovery hit” Dr. Tabor then published a press release with the following image as the only frame of reference: [1] 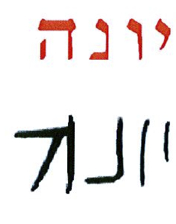 This is an unfaithful representation of what is on the ossuary.

From the very beginning this entire “find” has been handled sloppily. Where robot arms and ephemeral claims to early Christianity are fascinating, they do not replace traditional excavation and cataloging.

Furthermore, timing releases to be in synchronization with the Easter season without any traditional peer review beforehand is extremely problematic. Choices to tell a good story and make sensationalist claims seem to have been made over choices to present the evidence properly, and the fingerprints of such decisions seem to be all there.

I firmly believe that if this tomb were to be traditionally excavated that the evidence would be very clear that we are not looking at an early Christian tomb with “fish” on an ossuary labeled “Jonah,” but something much more mundane.

It would be something that the world of Biblical Studies would appreciate, discuss, and even “geek-out” over (as an old tomb is always fascinating to those in the field); however, it would make very poor television.