The Lord’s Prayer is with little debate the most significant prayer in Christianity. Although many theological and ideological differences may divide Christians across the world, it is a prayer that unites the faith as a whole.

Within the New Testament tradition, the Prayer appears in two places. The first and more elaborate version is found in Matthew 6:9-13 where a simpler form is found in Luke 11:2-4, and the two of them share a significant amount of overlap.

The prayer’s absence from the Gospel of Mark, taken together with its presence in both Luke and Matthew, has brought some modern scholars to conclude that it is a tradition from the hypothetical Q source which both Luke and Matthew relied upon in many places throughout their individual writings. Given the similarities, this may be further evidence that what we call “Q” ultimately traces back to an Aramaic source.

Looking at the underlying Greek text of both sources, and working from what is generally accepted as the earliest form of the prayer, the following unfolds in translation back into Galilean Aramaic:

Keep in mind that this rendition is a work in progress and will continue to be refined (as any effort in reconstruction should be).

In the most primitive form of the Prayer, God is simply addressed as Father, which in Aramaic is /abba/. Despite common mythology, /abba/ does not mean “daddy,” and was used by children and adults alike. /Abba/ is preserved transliterated into Greek letters (αββα = abba) in three places in the New Testament and each time it appears it is immediately followed by a literal Greek translation (ο Πατηρ = ho patêr).

Additionally, there are a number of other places where Jesus or others would have used /abba/ in direct address to either God or their own father worldly father (some of which parallel the three above) but in these cases they are only preserved in Greek.

(It is curious to note that the only place in the Gospel of John that Jesus directly addresses God as Father in chapter 17. At all time prior or afterwards, he always refers to God as “Father” in the third person. Never in direct address.) 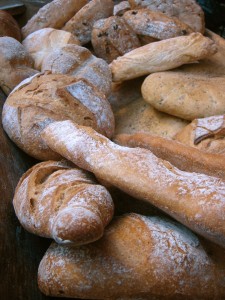 This raises some curious questions that have baffled scholars. Why would Jesus have used a singular, unique Greek word? In more recent times, the bafflement has turned to a different solution. Jesus, someone known to have spoken Aramaic in a prayer that was originally recited in Aramaic, would not have used επιούσιος, originally at all, so the question has evolved to “What Aramaic word was επιούσιος supposed to represent?” It would have to be something unique or difficult enough that whoever translated it into Greek needed to coin a word to express or preserve some meaning that they thought was important, or something that they couldn’t quite wrap the Greek language around.

The best fit for επιούσιος is probably the word  /çorak/. Where it comes from the root /çrk/ which means to be poor, to need, or to be necessary. It is a very common word in Galilean Aramaic that is used in a number of senses to express both need and thresholds of necessity, such as “as much as is required” (without further prepositions) or with pronominal suffixes “all that [pron.] needs” (/çorki/ = “All that I need”; /çorkak/ = “All that you need; etc.). Given this multi-faceted nature of the word, it’s hard to find a one-to-one Greek word that would do the job, and επιούσιος is a very snug fit in the context of the Prayer’s petition. This might even give us a hint that the Greek translator literally read into it a bit.

/yelip/  is another possible solution for. It is interesting to note that it comes from the root  /yalap/ or “to learn.” Etymologically speaking, learning is a matter of repetition and routine, and this connection may play upon regular physical bread, as well as daily learning from God (i.e. that which is necessary for living, as one cannot live off of bread alone).

Moving further along on this line of the Prayer, where the most common word for “bread” in the Aramaic language family as a whole is  /lahma/, the most common word for “bread” in Galilean is  /pithah/ (cognate to “pita bread” in English, although not that specific). This does not imply that /lahma/ does not occur in Galilean. It is simply far, far less common. Additionally, some times /pithah/ appears as  /pisah/ (the th perturbing to s), although this, too, is uncommon and is mostly found in rather late portions of the Palestinian Talmud.

3) And Forgive Us Our Debts/Sins

In nearly every Aramaic dialect contemporary to Jesus, the most common word for “sin” was synonymous with the word for “debt” which is  /hob/. When inflected and declined as  /haib/ it then takes on the meaning of “one who is in debt” or “one who sins.”

Furthermore, there were generally two words used for expressing “to forgive.” The first one is  /sh‘baq/, coming from the root “to allow, to permit, or to forsake,” where the second one is  /shrey/ which comes from the root “to dwell, to loosen (as in to unpack)” (taking it’s meaning from the latter). In liturgical formulae, they are used in tandem ( /shrey w-sh‘baq l-hobin/ = “loosen and forgive sins”), but either can be used by itself to express the same thing (much like how “permit” and “allow” are used interchangeably in English).

What is even more interesting to consider, is that a third wordplay is entangled with /haib/, as it is also — in its declined forms — nearly identical to one of the words for “love”  /hibah/ which comes from the root  /h‘bab/. In the Parable of Two Debtors (found in Luke 7) Jesus demonstrates this pun:

“A certain lender had two debtors (haibin). The one owed five hundred denarii, and the other fifty. When they couldn’t pay, he forgave (sh‘baq or shrey) them both. Which of them therefore will love (h‘bab) him most?”

Note the parallel to the Prayer. Not only is the same pattern with forgive used, but debt and love are held in parallel. This opens up some interesting potential meaning in the prayer:

“And forgive us our sins, as we forgive our loved ones.”

Which is quite a powerful statement. Whether or not this was intentional, however, may never be known. Next…

If you choose to Support the Project, you can view and participate in the following additional content:

15 thoughts on “The Lord’s Prayer in Galilean Aramaic”