Surfing the web I came across yet another problematic tattoo: 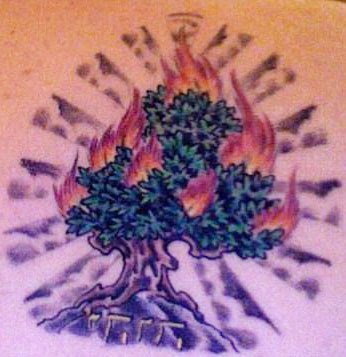 The text on the bottom is apparently supposed to read יהוה (the tetragrammaton, Yahweh, Jehovah, however you wish to refer to it as). It is backwards.

I believe that these persistent problems (see the original post Bad Hebrew/Aramaic Tattoos) are due to people not having right-to-left (RTL) support installed on their computer systems. This is because with the Unicode standard, RTL text is stored in a computer as a string of left-to-right characters by default leaving it for the computer program to decide how to display it.

שלמא עמכון
The first line of text above is an image of how things should look for the phrase shlama `amkun (peace be with you), where the bottom line is how your computer renders it using Unicode. If the above two lines are identical in direction, then you have RTL support working. If one of them is the reverse of the other, or you see a bunch of question marks, boxes or gobbildygook (known as “mojibake“), then you don’t have it installed.

If you are one of the unfortunates who do not have RTL, allow me to explain how one can ensure that their computer will display Hebrew and Aramaic letters in the proper direction.

If you’re using an Apple computer with Mac OS X 10.1 or later, congratulations! You don’t need to do a thing for Hebrew or Arabic. They’re already set to go. If you would like to display Syriac characters, however, the direction is correct, but the only drawback that you’ll come across is that Syriac-based scripts will not display the proper character forms. You can get around this by using this nifty word processor called Mellel which ensures that Syriac displays properly.

If you’re using Windows XP, then things are a bit more tricky. You’ll have to dig up your system install disk and follow the instructions posted on Micro$oft’s website: http://www.microsoft.com/globaldev/handson/user/xpintlsupp.mspx.

I have yet to touch Windows Vista with a 10-foot pole, so I am not sure as to the state of Hebrew/Aramaic and Syriac support. If someone could leave a comment about it I would be much obliged.

Several Linux distributions have native Hebrew and Syriac support, but generally I’ve noticed that people who use Linux as their everyday operating system can figure out how to switch things on without help. 🙂

If you’re using an operating system older than the ones that I’ve mentioned (Mac OS 8/9, Windows 98, etc.), upgrade. Unfortunately, ancient languages are the youngest additions to operating systems. For example, Phoenician has recently been added to Unicode 5.0 and support for it is still young and prone to glitch.

Again, even with this in mind, I must stress: