So, I’m presently thinking long and hard about merging The Aramaic Blog and AramaicNT.org (The Aramaic New Testament) permanently.

Here at The Aramaic Blog, I get a heck of a lot of traffic, but I haven’t been doing much with it lately. The Aramaic New Testament, however, has a lot going for it, it’s on an up-to-date self-hosted WordPress install so I have much more control, it looks spiffier, it hosts all of my Aramaic courseware and translations, and it’s really where I wish to expand upon over the next year. Both often overlap in their purview so much that I’ve often found myself debating which blog to post something new to.

Historically they were separate because The Aramaic Blog had more of an academic focus where AramaicNT.org had more of a theological focus. However, when I re-designed AramaicNT.org it became much more academically centered with fewer personal theological elements. Since then, I only tend to expound theologically on my personal blog, so the need for two Aramaic “spots” is no longer an issue.

So, if a merger is to happen, I would be taking all of the articles here on The Aramaic Blog and adding them to The Aramaic New Testament and setting up the proper redirects so that when folks go looking for the old articles, they’ll land on the new pages.

What do you, dear readers, think?

Over on Ralph The Sacred River, there is a neat discussion about recent Aramaic sightings in fiction (books & TV).:

I was surprised, though, to hear Aramaic used in the scripts of the series Spartacus on the Starz network. The series (now defunct, I understand) narrates the “lives and loves” of characters in an ancient gladiatorial training academy, and makes liberal use of cable TV’s license to display nudity and use profanity. Interestingly, beginning in the second season, a number of foreign gladiators enter the “ludus”: Ashur and Dagan, “a hulking Syrian.” The Romans speak English — the producers apparently unwilling to emulate Gibson and put Latin in their mouths — but not these new guys. They speak potty-mouthed Aramaic.

A couple of fun things about curious word choices when a translator comes up against a phrase they cannot translate very well… such as profanity. However, there is plenty of good Aramaic profanity floating around — given most of it doesn’t translate well into English without some explanation.

Ed also goes to show that not all Aramaic is equal, due to some vocabulary choices. 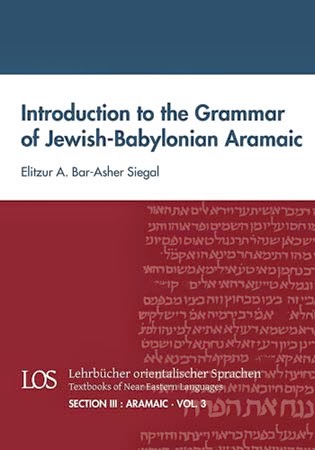 The dialect spoken and written by the Jews of Babylonia from the third century CE onwards is known as “Jewish Babylonian Aramaic”. This is the first comprehensive description of this dialect since Levias’ “Grammar of Babylonian Aramaic” of 1930. The current book offers a thorough reexamination of the grammar on the basis of a large corpus in its manuscript witnesses. It not only synthesizes the results of recent scholarship but introduces original insights on many important questions. The book is designed to appeal to readers of all backgrounds, including those with no prior background in Babylonian Aramaic or the Babylonian Talmud. The discussion frequently makes reference to parallels in other Semitic languages and in other Aramaic dialects, as well as to a variety of topics in linguistics . The book is structured as a textbook: it introduces topics in an order determined by pedagogical considerations, and offers vocabulary notes and translation exercises at the end. At the same time, the book can be used as a reference grammar. 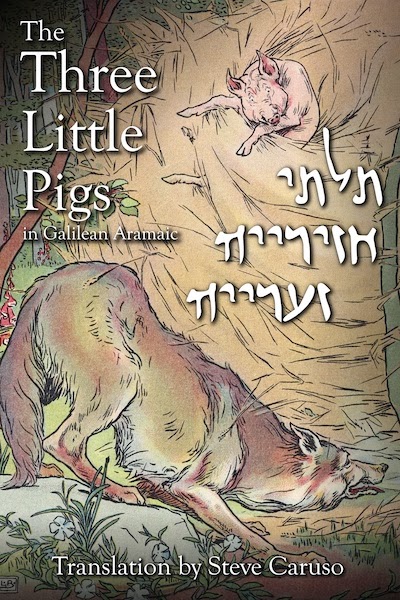 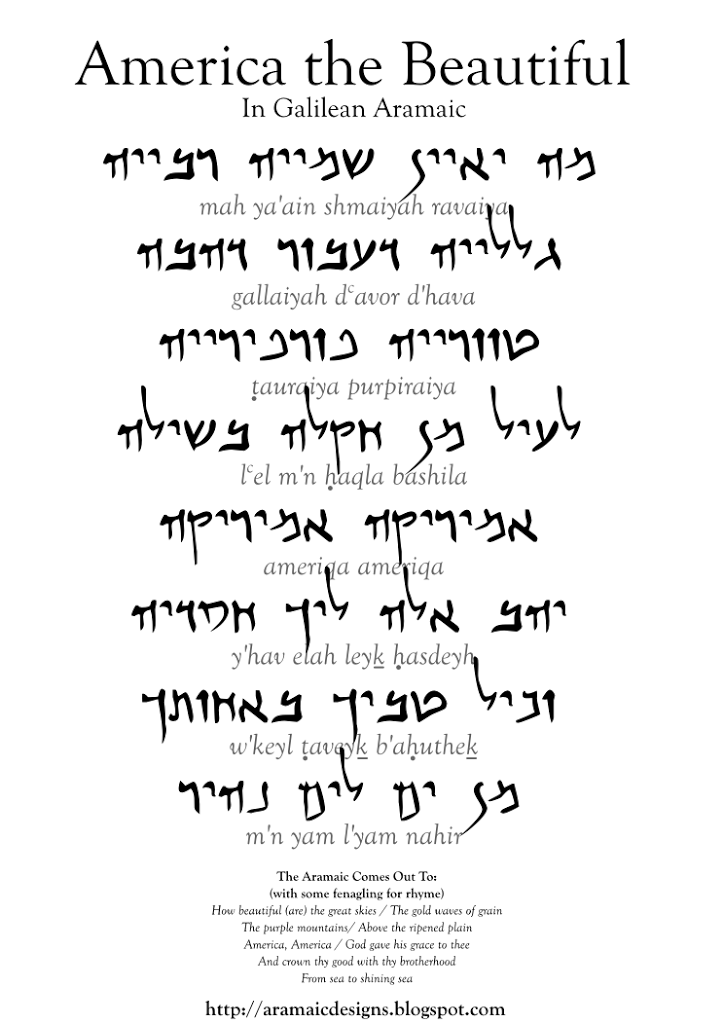 I was quite surprised when some interesting things started to come into my Twitter feeds for Aramaic.

So on a lark, I figured “what the hell?” and put together the ditty in Galilean. Had to finagle things a bit, but you can sing to the same tune.

Also it was done in the middle of the night, so apologies for typos. I’ve already spotted one, and 10 points to whoever catches it before I fix it. 🙂

What other Biblical languages can we get “America the Beautiful” in?