If you’ve been regularly reading this blog, you will know how much I emphasize proper research in obtaining a tattoo in a language of which you are not familiar. I always implore my readers to trust a professional translator or native speaker and then double-check the hell out of what they give you with other professionals or native speakers. With that said, this is once again what can happen if you do not.

The first example today is one that I’ve shown many examples of before. Native speakers of English (and other languages where aspects of grammatical gender have ceased to play a large part in the language) tend not to take the gender of a Hebrew or Aramaic phrase into account. Because of that we end up with problems such as this:

This image is being used under the doctrine of Fair Use.

This tattoo was found on the back of a man as a tribute to his wife. Unfortunately, the word דודי dodi (“my beloved”) is in the masculine form: “I am my beloved’s (masculine) and my beloved (masculine) is mine.”

This kind of mistake is one of the most pervasive one that I have seen because the translation is so readily available from any Hebrew edition of the Song of Songs and in English the word “beloved” has no gender.

Now this second one completely broke my heart. According to the owner, his grandfather knew Hebrew, so it was a large part of hearing him speak it during his childhood, so when his grandfather passed away, he wished to have the Hebrew word for “Grandad” tattooed across his back in big large letters. Take a look: 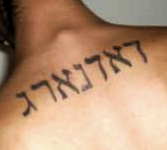 (© Dan O. This portion of the image utilized under Fair Use for criticism and educational purposes.)

In Hebrew… it is jibberish. To someone who speaks English, but knows the Hebrew alphabet, it’s horrifying: It is the English word “Grandad” transliterated backwards in the Hebrew/Aramaic alphabet.

13 thoughts on “Two More Tattoos For the Road”