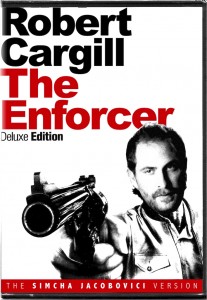 “Acting like an enforcer, Professor Cargill has assured us that by next week Puech will recant everything.”
– Simcha Jacobovici
So yes, Simcha Jacobovici is once again crying foul after bamboozling a scholar to seemingly endorse his ridiculous theories, when in truth they did not and is trying to lay the blame squarely upon the shoulders of Professor Robert Cargill.
Since I am content in my little bit of satire of Simcha’s overly-dramatic sweeping declarations, apparently elevating Bob to the status of Dirty Harry, I will simply link to the pertinent exposition and critical commentary:

UPDATE: Mark Goodacre over on the NT Blog has brought to light that the “Museum Quality Replica” of the so-called “Jonah Ossuary” has been given a facelift in light of criticism and the shifting claims of Simcha Jacobovici and James Tabor. Strangely enough in Replica 2 the inscription that supposedly says “Jonah” is almost too clear compared to the order of scratches on the first replica (which don’t connect certain “letters”), and more importantly the mess of scratches in the actual photographs of the genuine ossuary.

(This second replica’s all-too-clean inscription, by the way, was what Professor Puech was apparently basing his reading off of.)

Curiouser and curiouser. I wonder what Jacobovici has to say about this?

I have to say that I am disgusted.

However, it’s another issue entirely to call something a “replica” that’s demonstrably not faithful or accurate to the original, revise it without noting the changes after criticism has mounted so that it looks more like what you’re trying to prove, and then use that altered representation to apparently deceive someone prominent like Puech.

It’s even a further ethical failure, in my opinion, to then turn around and use that person’s opinion (which one can assume has been misinformed due to the altered inscription; think GIGO) as propaganda for one’s own “crackpot” theories.

I’m with Mark on this one. I believe that Simcha owes not just Prof. Puech, but everyone involved thus far an overdue apology for these tactics.

2 thoughts on “Robert Cargill, The Enforcer”