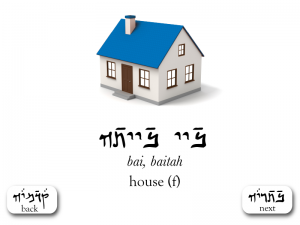 So, I was alluding to a Faculty Research Grant over here at RVCC that I applied for back in February, and before the summer I got the good news that I was approved! 🙂

What is it for? A Digital, Interactive, and Topical Galilean Aramaic Dictionary project that I will be constructing over the course of the summer. This post is serving to motivate me to get it done.

Here’s an excerpt from the proposal that was accepted:

Aramaic is a family of languages that is part of the Northwest Semitic group with a written history that stretches back over 3,000 years and is related to Akkadian, Ugaritic, Amharic, Hebrew, and Arabic. Among other things, it has served as the language of the ancient Aramean kings, the official language of the western half of Darius I’s empire, one of the languages that helped spread Buddhism under Ashoka, and has strong influences upon both the writing system and vocabulary of Classical Arabic.

Galilean Aramaic, a Western Aramaic language, is of special importance within both Judaism where it was the language of the Jerusalem Talmud (and a large body of other of Rabbinic works) and within Christianity as it was the everyday language of Jesus of Nazareth and his earliest followers. Despite that, Galilean has proven to be one of the more obscure and misunderstood dialects due to systemic – albeit well-intentioned – corruption to its corpus over the centuries, involving the layering of Eastern scribal “corrections” away from genuine Western dialect features. To this day there is no easily accessible grammar[1] or fully articulated syntax, and due to the academic predisposition towards viewing Aramaic languages through an Eastern Aramaic lens, assessing vocabulary with appropriate orthographical and dialectical considerations has proven difficult.[2]

It is that last problem that my proposal for a Faculty Research Grant seeks to remediate. Over the course of the last 10 years or so, I have been compiling a topical lexical reference of the Galilean dialect comprising all words that appear in the corpus over five times with the intention of building a web-based, interactive dictionary. It will serve as both a learning tool as well as a reference work for both academics and laymen grappling with the dialect.

The system that I use seeks to address difficulties that have been handled poorly in other works, including a more appropriate vocalization system (the early 5-vowel “Palestinian” vocalization system from antiquity, rather than the more expansive Tiberian or Babylonian systems which do not match Galilean phonology), and more genuinely Galilean/Western Aramaic orthography.

[1] One reliable grammar by Michael Sokoloff is in Hebrew and uses a standardized orthography, where the other reliable grammar by Steven Fassberg is not for the faint of heart (it is far too technically-oriented for laymen and –arguably – even some experts). All other grammars published to date (Dalman, Stevenson, Levias, etc.) are based upon a corrupt or inconsistent corpus.

[2] For a fuller handling of the problems facing the Galilean dialect, see E.Y. Kutcher’s “Studies in Galilean Aramaic” (Bar-Illan University, 1976).

So you can see why I’m a bit excited.

I’ve already set up some webspace at RVCC for it, which you can find here:

As you can see, it’s very sparse at the moment, but I’ll be posting updates and taking feedback right here on AramaicNT.org.

If anyone would like to help out with data entry, sourcing images, or testing, feel free to email me. There’s plenty of work to be done before the summer is out.