Yep, finally got around to a Kickstarter. If you’re interested in Aramaic (and specifically helping with preserving obscure Aramaic dialects) be sure to check it out. 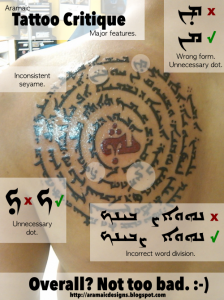 It has been posted for everyone to enjoy here:

Over on AramaicNT.org:
As per request, we nearly have The Lord’s Prayer, reconstructed in early Galilean Aramaic in its most primitive form ready to share. It will be presented in the same form as the rest of the translation project so that anyone can pronounce it well and easily without prior knowledge of the language, itself.
It will also be accompanied by a set of notes detailing the different choices and difficulties involved with the translation effort, as well as possible alternate readings, and discussions about the prayer within the context and culture of Biblical times.
But there is a lot more that is coming with it. Project supporters will also have access to:
It’s going to be a heck of a lot of fun.
Peace,
-Steve