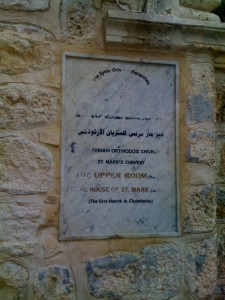 Efforts to legally differentiate between Christian and Muslim Arabs bore fruit on Tuesday as Interior Minister Gideon Saar ordered that the population registry recognize a separate Aramean identity.Christians who identify with the ancient people can decide to register as Arameans instead of Arabs. 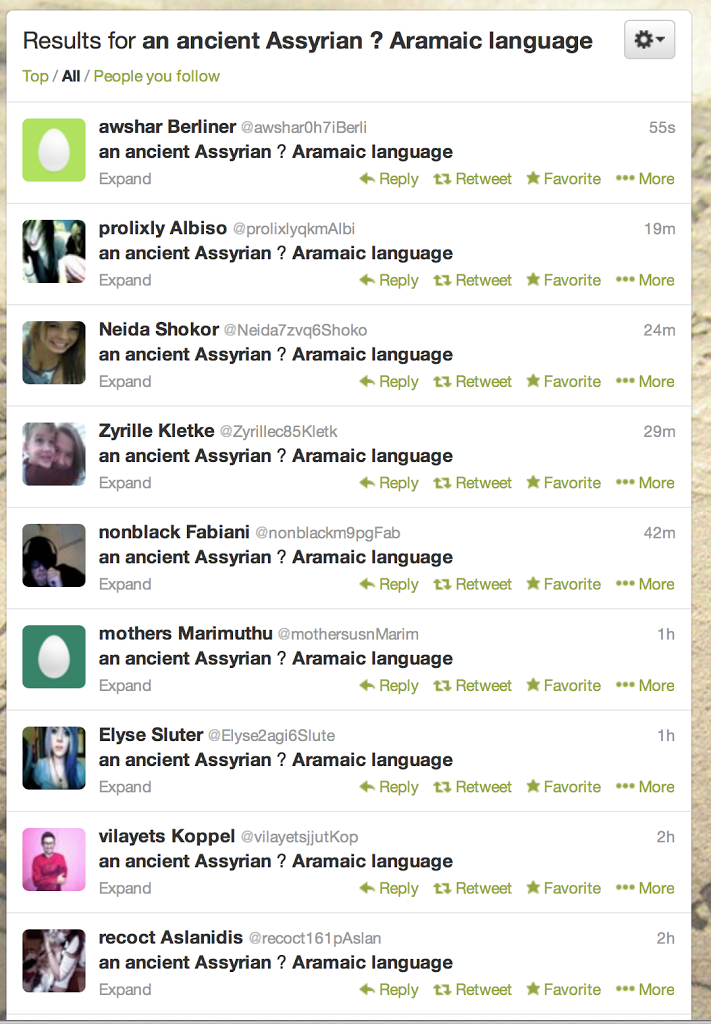 So, one of my Twitter feeds pulls in every time “Aramaic” “Syriac” or “Peshitta” is mentioned, and very often I get the same phrase coming back at me time and time again:

What do all of these verbatim posts have in common?

They all come from shill Twitter accounts. They are bots spouting rounds of nonsense from the same book of quotes. Each of those accounts has 0 followers and most of the tweets are the same (albeit in different order). Perhaps they are to later used for nefarious purposes? I do not know. All that I do know is that there are a lot of them and that, they just junk up my feeds.

The news that the Chicago Assyrian Dictionary has been completed, and all its volumes are free online, has been shared by Charles Halton, Duane Smith, H. H. Hardy, and AWOL.

Today, following one of my news feeds, I came across two very odd videos on YouTube. Here’s the first one:

When I was reading the title and watching the verb forms it was going over, I began scratching my chin in puzzlement. In Imperial Aramaic, Pe’il and Pu’al forms are *extremely* rare (in fact they tend to only show up in participle forms if at all) and are not the direct passives of Pe’al and Pa’el.

The three forms this video *should* have been going over were Hithpa’al, Hithpe’el and Hoph’al.

Now here’s the second one:

Among other things, notice how they use “merci” for “thanks.” This immediately struck me as odd, as “merci” is distinctly French, not Assyrian Neo-Aramaic.

I would have expected “basima/basimta” or even “taude,” and I was not the only one judging by the comments; however, one of the comments mentioned:

[…] One thing, though is like a little scratch to my ear.”Merci’ , which is used mainly by Lebanese and Iranian Assyrians. Other Assyrians, who went from Atra to different countries, like﻿ Russia, and were not subjected to Western influence, don’t use it. It is French, […]

The rest of the comments (especially on the 4th page) also reveal some interesting regional differences.

“Syria is according to information received by the Society for Threatened Peoples -STP (Gesellschaft für bedrohte Völker GfbV) increasing pressure on the Assyrian Aramaic language and culture. The international human rights organisation with its centre in Göttingen stated on Tuesday that the Syrian secret service has forbidden a performance of the popular Assyrian Aramaic musician, Habib Mousa, at a concert of another artist in the city of Kamishli in the north-east of the country. For the Assyrian Aramaic Christians this ban is a sign that the totalitarian Baath Party, which has ruled since 1963, is still pursuing its goal of forcible Arabicisation of the Assyrian Chaldaic and Kurdish ethnic groups”, criticised the chair of the German section of the STP, Tilman Zülch. “The intention is to ensure that the Christians give up among other things their New Aramaic language in favour of Arabic.” The opposition Assyrian Democratic Organisation ADO also sharply condemned the ban on the performance by the Syrian authorities.”