“The new tests carried out in the University of Padua labs were carried out by a number of university professors from various Italian universities and agree that the Shroud dates back to the period when Jesus Christ was crucified in Jerusalem. Final results show that the Shroud fibres examined produced the following dates, all of which are 95% certain and centuries away from the medieval dating obtained with Carbon-14 testing in 1988: the dates given to the Shroud after FT-IR testing, is 300 BC ±400, 200 BC ±500 after Raman testing and 400 AD ±400 after multi-parametric mechanical testing. The average of all three dates is 33 BC  ±250 years.“

Pardon my exasperation as I usually do not comment on such things here — especially in a vulgar manner as this — but:

All three tests are completely inconsistent with one another, and due to this large swath of inconsistency should be thrown out (and would be thrown out by your average statistician). Think about it: The collective margins of error min-max to 700 BC to 800 AD — Or about 1500 years of uncertainty.

Averaging them the way the author did falls victim to the so-called Texas Sharpshooter Fallacy.

In essence, it’s hole-y argument, not a holy one. Wholly. 🙂

If you want to know more about some more serious Shroud of Turin research, I suggest that you go read the work of Antonio Lombatti (blog, turin search). His commentary can be a bit biting at times, but he’s quite the expert on it.

UPDATE: Archbishop Cesare Nosiglia (The Archbishop of Turin and custodian of the Shroud) has come out against these test results, saying that the provenance of the cloth that Fanti and Gaeta tested is squiffy and probably did not come from the Shroud at all:

Roughly (as my Italian is a bit rusty):

“Since there is no degree of certainty as to whether the materials upon which these experiments were carried out belonged to the Shroud — says a statement from [Archbishop] Nosiglia — the custodian declares they cannot recognize any serious value from these alleged experiments.”

DISCLAIMER: Don’t think me wrong. I think that relics are awesome (for example, I’d honestly love to grow a cutting of the Glastonbury Thorn, regardless of its origins), but the Shroud, like so many other relics, is a fake. It doesn’t fit how Jews were buried in the 1st century (both the size of the cloth, how it was folded, and the weave of the fabric, itself). Sadly, when it comes to bogus relics they say that if one were to gather up all of the pieces of The True Cross that have circulated throughout the ages, that one could easily build Noah’s Ark with enough left over for a couple of deck chairs. 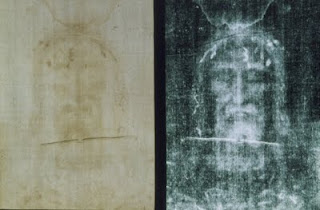 Again, more hype about the supposed Aramaic on the Shroud of Turin (which I mentioned in an earlier blog post). As such I have hesitated to comment yet again. Now, however, every news source is very loud about this “new” discovery.

All I have to say at this point is: Please reveal to us the text.

I have not been able to see a single image of it on the whole of the Internet, so until visual contact has been established, I will remain a tad bit skeptical. 🙂

A recent study by French scientist Thierry Castex has revealed that on the shroud are traces of words in Aramaic spelled with Hebrew letters.

A Vatican researcher, Barbara Frale, told Vatican Radio July 26 that her own studies suggest the letters on the shroud were written more than 1,800 years ago.

She said that in 1978 a Latin professor in Milan noticed Aramaic writing on the shroud and in 1989 scholars discovered Hebrew characters that probably were portions of the phrase “The king of the Jews.”

Castex’s recent discovery of the word “found” with another word next to it, which still has to be deciphered, “together may mean ‘because found’ or ‘we found,'” she said.

What is interesting, she said, is that it recalls a passage in the Gospel of St. Luke, “We found this man misleading our people,” which was what several Jewish leaders told Pontius Pilate when they asked him to condemn Jesus.

She said it would not be unusual for something to be written on a burial cloth in order to indicate the identity of the deceased.

Personally not quite sure about the authenticity of this particular relic (I lean towards skepticism) but I would become absolutely giddy if I could hunt up some images of this text.