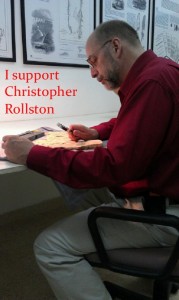 If you’ve been following the news, Christopher Rollston (one of the world’s foremost epigraphers and paleographers) is facing losing his job because he wrote an op-ed in the Huffington Post about the marginalization of women in the  culture and context of the Bible.

As countless academics have stepped forward and said, this piece was nothing revolutionary, or even controversial (it is widely accepted that during the era the Bible, there were different values in comparison to the modern day when it came to women and their place in society). It was also written for a popular publication in the appropriate tone for a popular publication, not for scholars or in a manner presented to the field.

However, regardless of this, Emmanuel Seminary is proceeding with disciplinary action against Rollston, who is tenured, as one of their “six figure” donors is apparently withholding their financial support because Rollston’s article offended them, and the Seminary is (apparently) hoping to use the exception for religious institutions to terminate employees in certain positions who do not adhere to the spirit of the institution’s confession of faith.

I find this troublesome on many levels.

First, I do agree that a religious institution, under the law, has the right for certain members of its ranks to keep to a particular confession. This is the same mechanism that allows Christian, Jewish, Muslim, etc. organizations to hire only Christians, Jews, Muslims, etc. as leaders and religious staff without being sued for religious discrimination. This protection, quite reasonably, does not extend to other staff like janitors, workmen, contracted companies, etc. as it is not essential for the mission of such an organization.

However, the problem here was not that Chris went against a particular confession of faith, which he did not. He was simply stating the consensus on the sociological issue for his field in a manner suitable for laymen via a popular magazine. What this appears to be, with less and less doubt as more details come to the forefront, an inter-personal dispute between him and fellow colleagues, and unnamed donors, which is one of the very things that tenure (as an academic institution) is supposed to protect against.

This all said, I support Christopher Rollston.

(h/t to Joel Watts for the image.)

So I’ve gone over each clear picture of the Lead Codices I’ve been able to get my hands on, and I’ve compiled a table of every readable glyph with more to follow.

UPDATE APR 11: I’ve cleaned up this post a bit and expanded the bullet points.