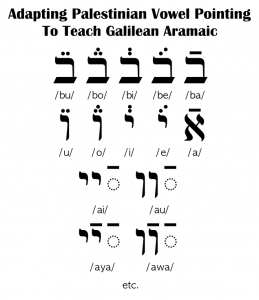 As part of my kids’ curriculum, my wife and I have decided that we’re going to begin formally teaching (as opposed to the current “informally” teaching) French and Galilean Aramaic, both written and spoken.

Because of this, on the Galilean end I’ve been pondering about the best way to find a consistent notation for vowels. For the longest time, in my own personal use, I’ve used a modified form of Tiberian vowel pointing, mostly to mark words that are ambiguous.

However, the Tiberian system is a bit *too* particular for Galilean vocalization, as it covers many shades of vowels that aren’t represented in what we know of Galilean pronunciation. (“The Galileans are not careful with their speech,” rings the Babylonian Talmud.)

From the small snippets that have vowel markings and other means of analysis, we see that Galileans didn’t really differentiate between patah (/a/) and qamatz (/ɔ/) (patah often shows up where one would expect a terminal qamatz) or between segol (/ɛ/) and tzere (/e/), nor did they differentiate between the various types of hataf short-vowels (/ă/, /ɛ̆/, /ɔ̆/) (in fact, unstressed vowels of any sort tended to reduce to ambiguity as it was).

So I thought to myself: Should I simply use Tiberian as I have been? It’s kind of the wrong tool for the job. It’s far, far too granular and it would confuse the heck out of anyone reading it. (People are already confused enough when they’re exposed to Galilean.)

So what else should I use?

Why not Palestinian vowels?

Yes, they’re fairly obscure today (about as obscure as Galilean Aramaic, admittedly) but as early Palestinian Hebrew had a similar inventory of vowels to Galilean (and in some cases similar quirks of pronunciation), the earliest set of markings fits perfectly.

Since any choice of vowel markings for a language that mostly died off before vowel markings came in vogue is somewhat arbitrary, choosing a traditional set that fits well — I believe — is a good choice. It would also be distinct enough to tip off anyone reading it that it’s not the language they may mistakenly assume it is.

Palestinian vowels are (like Babylonian vowels) supralinear, or are written above the letters rather than below (like Tiberian). Some believe that they were developed before the Tiberian system, but were quickly supplanted by it as Tiberian became increasingly popular. As you can see in the picture at the top of this post, they map to Galilean very easily and it doesn’t take much effort to memorize them.

I’m going to write up a few lesson plans and see how it pans out, and I’ll relay my success (or failure) here after a few weeks.

The new Quiz module on DARIUS seems to be working fine and I’m almost done importing all of the old content from the Moodle install.

Now all that needs to be done is to reformat and clean up the index page, link everything back together, and import the quizzes and if all goes well we should be ready to roll again tomorrow evening (Wednesday).

Where learning a new language is tough, learning rare, obscure or ancient languages that are no longer spoken is exceedingly difficult.