A recent study by French scientist Thierry Castex has revealed that on the shroud are traces of words in Aramaic spelled with Hebrew letters.

A Vatican researcher, Barbara Frale, told Vatican Radio July 26 that her own studies suggest the letters on the shroud were written more than 1,800 years ago.

She said that in 1978 a Latin professor in Milan noticed Aramaic writing on the shroud and in 1989 scholars discovered Hebrew characters that probably were portions of the phrase “The king of the Jews.”

Castex’s recent discovery of the word “found” with another word next to it, which still has to be deciphered, “together may mean ‘because found’ or ‘we found,'” she said.

What is interesting, she said, is that it recalls a passage in the Gospel of St. Luke, “We found this man misleading our people,” which was what several Jewish leaders told Pontius Pilate when they asked him to condemn Jesus.

She said it would not be unusual for something to be written on a burial cloth in order to indicate the identity of the deceased.

Personally not quite sure about the authenticity of this particular relic (I lean towards skepticism) but I would become absolutely giddy if I could hunt up some images of this text.

It is traditional that I bring up the common myth that the Aramaic word “abba” means “daddy” around this time of year, but I must admit that this is the first year in a long time that sightings of that anecdote among the blogs are few. (So either, there isn’t as much interest this year, or people are actually doing their research. 🙂 )

So, for those of you who aren’t familiar with this particular meme, it is common to find around the Internet and in sermons throughout the world that where Jesus is recorded in the New Testament to use the Aramaic word “abba” that the term was an informal word, the likes a child would refer to their pop (i.e. “dad” or “daddy”).

This stemmed from an idea that was originally proposed by a scholar named Joachim Jeremias (b1900-d1979); mainly, that the form “abba” originated from “child-babble.” The connection between “abba” and “daddy” was then popularized by his following.

However, this idea was immediately challenged by a number of other scholars, such as James Barr who published an article entitled “Abba Isn’t ‘Daddy'” (in the Journal of Theological Studies) which outlined the numerous problems with such an assertion and addressed them in detail.

Overall, I believe that Mary Rose D’Angelo summed up what happened next nicely:

“Jeremias began almost at once to retreat from the claim that “abba” had the same connotations as “daddy.” In a sense, Barr’s title (but only his title) misrepresents Jeremias. Even as Jeremias acknowledged that the word was in common use by adults and was used as a mark of repect for old men and for teachers, he continued to stress the origins in babytalk and the consequent intimacy as a special component of Jesus’ use of the word. This meaning seems to have been the basis on which he regarded Jesus’ use as absolutely distinct from the Judaism of his time.

The NT itself gives quite a different reading of αββα. Each of the three occurrences of αββα in the NT is followed by the Greek translation ο πατερ, “the father.” This translation makes clear its meaning to the writers; the form is a literal translation — “father” plus a definite article — and like abba can also be a vocative. But it is not a diminutive of “babytalk” form. There are Greek diminutives of father (e.g., παππας [pappas]), and the community chose not to use them.

And beyond this, many years after Jeremias’ death, modern linguistic study of how children pick up speech has completely discounted his conclusions of abba as “babytalk.”

There is still a point of confusion: In Modern Hebrew, “abba” has become commonly used as… You guessed it: “Daddy.” So, when a Hebrew speaker happens upon this anecdote, to them it makes “perfect sense.” 🙂

Nevertheless, happy Father’s Day to all of the pas, fathers, pops, dads, papas and daddies out there, wherever you are!

It has been quite a while since I’ve posted on here, mainly because between the crazy economy, Presidential transition, filling translation orders, classes at the University, and work on the Comprehensive Aramaic Lexicon Project, I have been swamped.

I’ve never considered myself an archeologist in any sort of literal sense, but now sorting through 20 year old code and piecing together old systems alongside silver casting phrases in Old Aramaic, I’m feeling this weird sense of irony.

Hopefully I’ll have some neat stuff up on here soon relating to the following:

And lastly, anything else you can think of. Simply leave a comment on this thread with your ideas.

In my usual searches across the Internet for Aramaic tattoo oddities, I came across the following tattoo that illustrates an very important point about how different some dialects can be. Here is a transliteration of the text:

In some dialects of Modern Aramaic, Arabic loan sounds and loan words have creeped into the language. To represent these, some dialects use diatrics to represent Arabic phonemes by marking similar consonants.

For example, the set of diatrics used to write Arabic text in Syriac letters is known as “Garshuni” (or “Karshuni”) where small loops and dots are added into the crooks of the letters to indicate the Arabic equivalents. In Assyrian dialects, a similar principle is applied, where a squiggle “~” (known as a Majliana) is placed under or over certain consonants.

The letter in question is the gâmal “G” at the beginning. 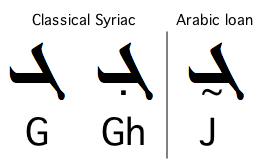 When tattooing, sometimes these diatric squiggles can end up looking like standard vowel markers. Because of this gbrt’ can first be read as a loan-word from the Arabic “jabbar” which means “almighty.” Jbârthâ’, however, should be masculine, not feminine as it would be an adjective (i.e. Jesus -is- mighty). This would make the entire translation read:

…which doesn’t seem to be what the owner is after.

On the other side of interpretation lies gebârthâ’ which is a word found in several dialects of Aramaic (most notedly Syriac) where it is the feminine form of gabrâ’ which means “man” (i.e. “woman”). This would make the translation read:

…also not quite what they were after.

I won’t repeat myself again as to how important it is to double-check your translations. 🙂 Aramaic Designs will do it for free so there is no excuse!